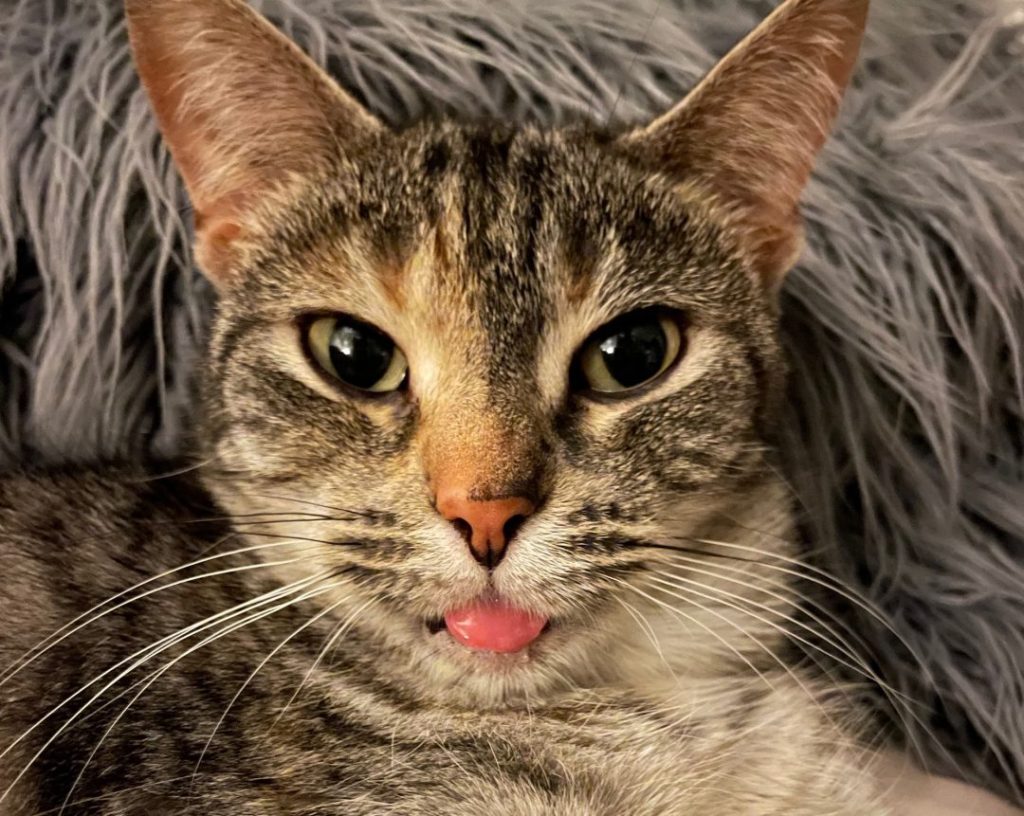 Midge was diagnosed with Feline Leukemia Virus at just six months of age. Today she is a happy, healthy four-year-old cat!

Feline Leukemia Virus, or FeLV, is one of the most common cat-specific infectious diseases in the United States. According to the Cornell Feline Health Center, around 2-3% of the country’s total cat population is infected with the virus. Despite its relative ubiquity, FeLV remains one of the most poorly understood feline health conditions, with many cats being needlessly euthanized in shelters and veterinary offices upon testing positive for the virus.

FeLV is a retrovirus that weakens a cat’s immune system by attacking cells in the blood and organs. Contrary to what its name suggests, FeLV is not a form of cancer, but its ability to cause cancer (including leukemia) is what initially earned it the misleading moniker. It spreads most readily in cats with compromised or underdeveloped immune systems — young kittens are especially vulnerable, along with cats who take immunosuppressant medications such as steroids, or who have other medical conditions that weaken their immune systems. You can learn more about the symptoms of FeLV and how it spreads in our other blog post: FIV, FIP, & FeLV: A Primer for the Common Cat Lover.

While FeLV is certainly a serious disease and should be treated as such, we at Ferndale Cat Shelter believe that it is not, and should never be, a death sentence. We’ve worked to protect FeLV+ cats in our care and to fight against the stigma that cats affected by this virus are un-adoptable. In fact, we have placed several FeLV+ cats in loving foster and adoptive homes to incredible results. 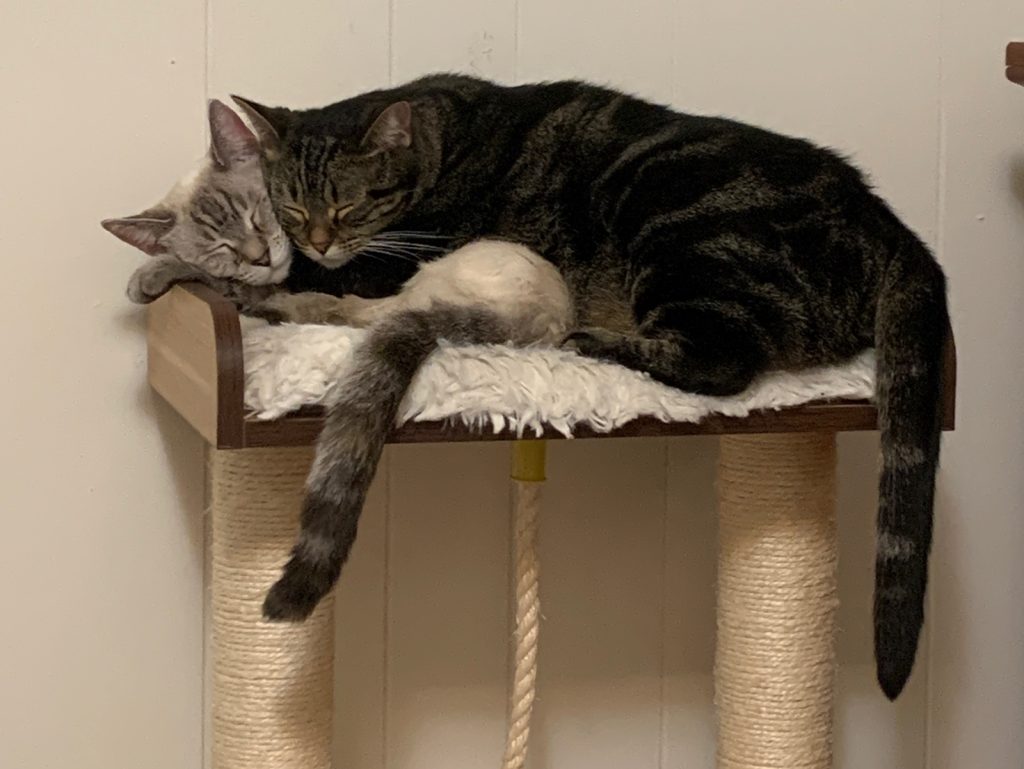 Ori and Midna are happy, healthy kitties. Although they’re both positive for FeLV, they love to play and snuggle, just like “normal” cats!

“It has been wonderful. They bring joy and purpose to my life every day,” says Jacquelyn, who adopted Ori and Midna — two FeLV+ cats — from FCS in January of 2021. “I’ve always had a heart for taking in and caring for animals in need. So I knew that they would be a perfect addition.”

Like most adopters, Jacquelyn had no experience with FeLV prior to meeting Ori and Midna. So rather than jumping straight into a formal adoption, she took her two new family members home under a foster-to-adopt arrangement. During the foster period, FCS covers any and all necessary medical care, supplements, medicines, and procedures, offering adopters a chance to ensure their new special needs cat will be a good fit for their family and lifestyle. 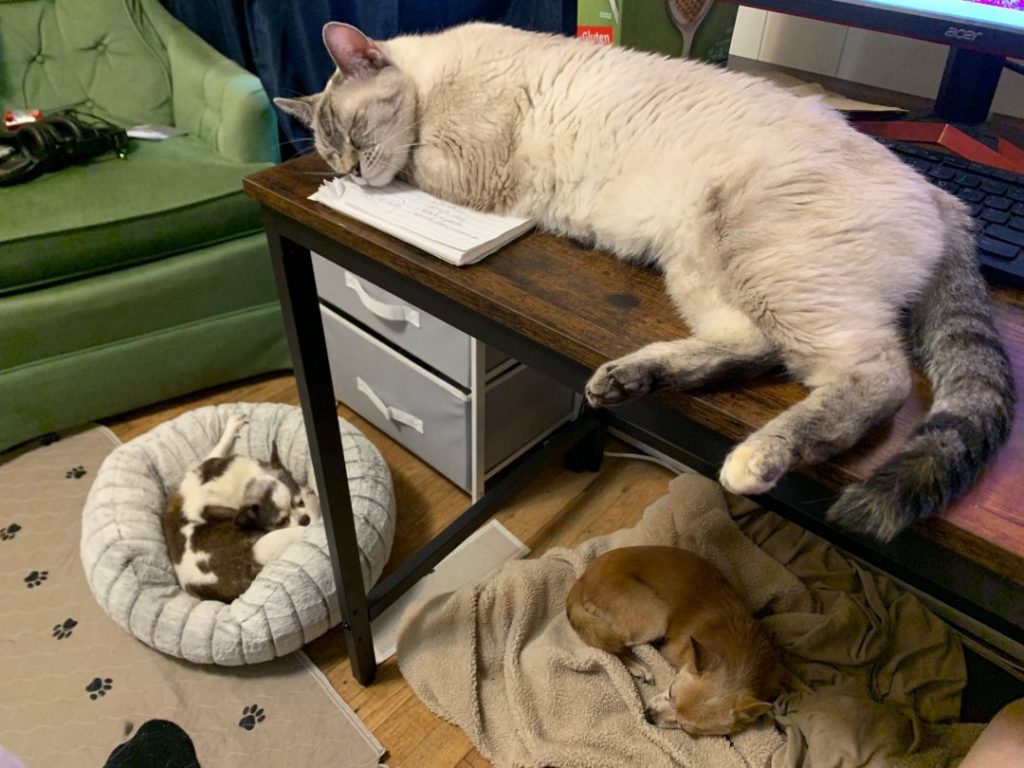 Since dogs are not affected by FeLV, they can safely cohabitate with FeLV-positive cats. Ori loves the company of her doggy siblings!

“FCS was extremely supportive throughout the foster-to-adopt process. It was made clear from day one that I would always be able to reach out with any questions or concerns at any time,” Jacquelyn says. “Even after adoption, the feeling of support and connection continues to remain. I had and continue to have the ability to ask questions and seek guidance any time I need it, whether it’s a small medical concern, questions about a procedure, or general advice.” 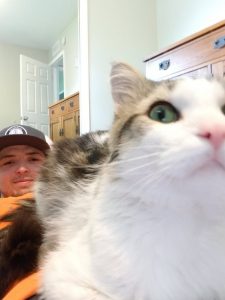 Tuna poses for a selfie with foster dad Ray.

Most adopters and fosters of FeLV+ cats report that their cats’ daily care isn’t all that different from that of a “normal” cat. FCS recommends twice yearly vet check-ups for FeLV+ cats, as well as the inclusion of an immune-boosting supplement in daily meals. Aside from that, the only special care most FeLV+ cats need is regular monitoring of weight and vital signs.

“In terms of fostering them, it’s not too different from having ‘normal’ cats,” says new FCS foster Ray, who recently took in FeLV+ cats Tuna and Ted. “I think I pay a bit more attention to them than ‘normal’ cats in terms of watching their weight, food intake, inspecting poop, etc. Over all, they are both very good boys, and pretty easy to care for!”

Because FeLV is contagious under certain circumstances, shelters have a difficult time placing FeLV+ cats, even temporarily. Many fosters refuse to take them, leaving rescues like FCS in a bind when an otherwise healthy cat tests positive.

In an effort to step up to the plate for metro Detroit’s FeLV+ cats in need, Deanne Iovan, Executive Director at FCS, has adopted four FeLV+ cats over the last four years, and has fostered many more. Her most recent addition, Spike, was found outside sick and dehydrated. Despite testing positive for FeLV, he was successfully treated at a local veterinary hospital and was able to make a full recovery. 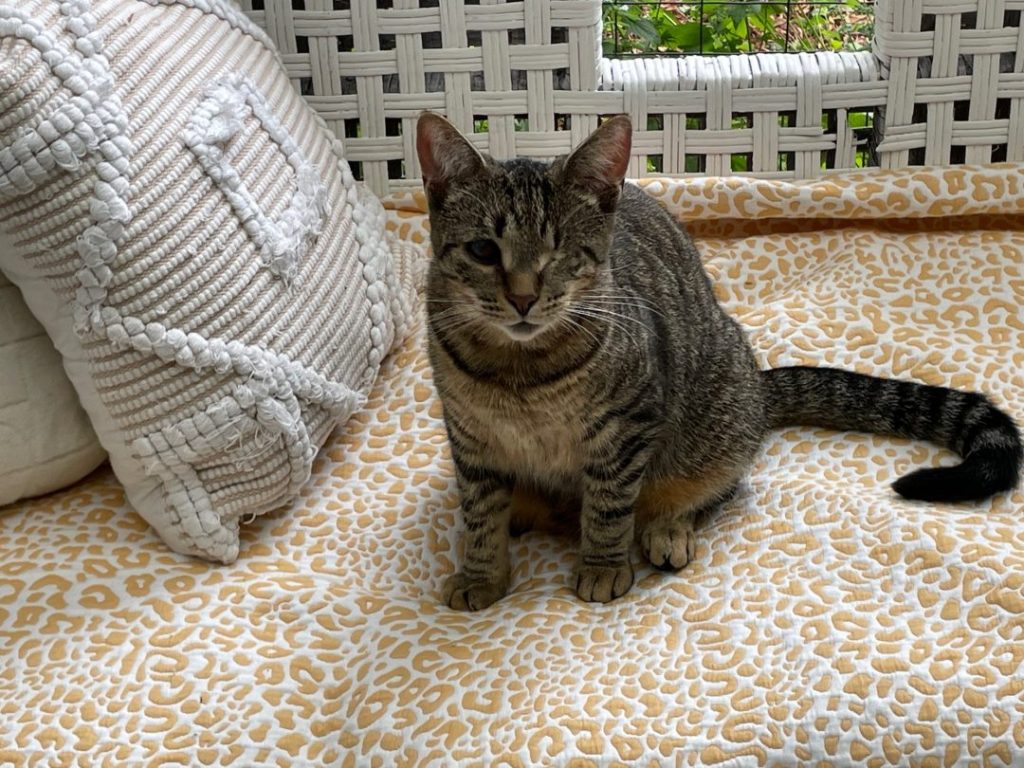 Spike is FeLV+. He loves to spend his days playing and catching rays on his very own catio!

“(Spike is) an example of cats’ resilience,” Deanne says. “He had an (upper respiratory infection) in his eyes and was dehydrated. In spite of the fact that he was Feline Leukemia positive, he pulled through this ordeal. He can’t see, but he’s the smartest cat and the best hunter, because he’s adapted.”

Because FCS refuses to give up on these remarkable, resilient cats, we need FeLV-friendly fosters more than ever before. If you’re interested in caring for an FeLV+ cat, but nervous about what that may entail, fear not: FCS is here to support our fosters every step of the way. We’ll do everything we can to make sure you feel confident before, during, and after your adoption and to ensure that your new family member has the best possible chance at a long and healthy life.

Interested in fostering or adopting an FeLV+ cat? Here’s what you’ll need:

For more information on becoming an FeLV+ foster or adopter, send us an email, or fill out an application on our website.